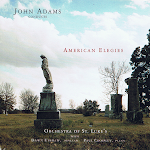 “Eros Piano is a quiet, dreamy soliloquy for piano played against a soft, lush fabric of orchestral clusters. It was a direct response to a piece by Toru Takemisu called riverrun which I had heard in a performance by the English pianist Paul Crossley.
It was equally motivated by the exceptional pianism of Paul Crossley, specifically his manner of making the instrument resonate. His is a control of both tone and touch that seems perfectly suited to the kind of shimmering atmosphere this piece aspires to”
(John Adams)
X 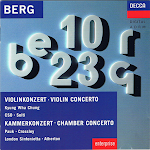 ... Paul Crossley conveys an infectious sense of fun whilst treading a careful line between observation and caricature.

Every note that he draws from his piano speaks of a desire for technical and stylistic perfection that is only found amongst the masters. 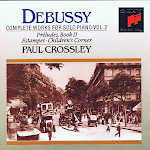 Paul Crossley is one of music’s natural aristocrats. Guided by a penetrating intelligence which takes nothing for granted, he brings to every note a care and attention which savours its incidental beauties – or perhaps its deliberate harshness – while placing it with immaculate precision in the context of a perfectly crafted objet d’art.

The subtlety of the colours, the transparency of line, the objectivity of the argument, the variety in atmosphere, the perfection of style make this Debussy extremely precious 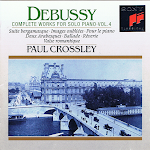 Crossley may just be the Debussy pianist of our time… 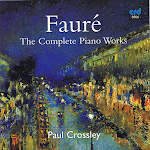 I am captivated by the radiant surfaces and sympathetic depths of this playing. The unique problems – in the matters of touch and rubato, for instance – presented by Fauré’s complex balance of sensuousness and austerity are solved over and over again as if by natural magic: the great sequence of Nocturnes emerging more than ever as a diary of the composer’s entire creative evolution ... There have been a number of integral sets over the years: this surely outclasses them all.

He approaches Fauré’s piano music with a blazing conviction of its underestimated greatness and an acute understanding of its elusive individuality.

... a velvet touch and flexibility that reminds one of Josef Hoffmann. 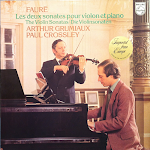 At last, here is a coupling of these Sonatas which reveals them as the diverse, inspired pieces that they are … if this isn’t great duo playing, then I don’t know what is!

… readings of great distinction and elegance … if there has ever been a finer version of either sonata, it has passed me by.

This talented young pianist made a considerable impression in Tippett’s sonatas. He now reveals himself as an ideal interpreter of the very different César Franck … Crossley’s truly splendid performances should be welcomed by any connoisseur of the romantic repertoire ... No one should receive with indifference these most persuasive and technically superb interpretations, with the bonus of no less finely played Fauré.

Here’s enlightenment; Crossley catches the exultation and the serene anxiety of music that rarely gets its due… snap it up.

Here this subtle pianist makes us admire Franck’s sense of architecture, his feeling for “grand form”. With Crossley taste and intelligence holds sway, refinement and sincerity being equally matched. 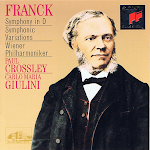 In the Symphonic Variations Maestro Giulini has found a partner of his own stature in Paul Crossley, a refined, sensitive artist who shuns pretension like the plague. His touching discretion, wonderful sense of celebration, and playful grace – rarely seen nowadays – allow Crossley to re-interpret a piece which can sound academic were it not in the hands of two uncommonly fine musicians. 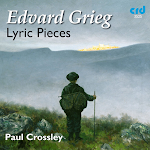 ... the recording overall achieves terrific atmosphere and a great many strongly communicative qualities. Crosslev, whose grasp of highly demanding twentieth-century repertoire by composers such as Tippett, Debussy and Takemitsu is both vast and compelling, brings frequent revelations to his performances in this recording. His ‘Arietta’, Op. 12 No.I, and indeed his ‘Nachklange’, Op. 71 No. 7 (‘Remembrances’), start and finish the disc absolutely beautifully, showing both him and his instrument in perfect sympathy. 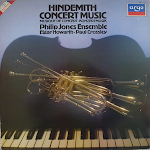 In the Concert Music, Op.49 the geniality and gravity of the brass are more than a match for the garrulity of the piano part (extremely well characterised by Paul Crossley) … the result is a superb display of the authentic Hindemithian virtues – purposeful argument dressed up in richly varied colours.

6 Episodes from a discontinued diary. Op. 20

This is perhaps the most comprehensive survey of a 20th century composer’s chamber music since Atherton performed a similar service for Schoenberg, and if possible the results are even better … honours must go to Paul Crossley for his sympathetic and frequently dramatic performances … his account of the incomplete Sonata glows with passion as do his performances of On an Overgrown Path and In the Mist 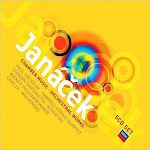 ... Concertino and Capriccio Paul Crossley plays splendidly … what matters is the liveliness, the fluency and the subtlety of understanding which he brings to the music ... the Sonata is a powerful, dramatic work, but there is at its centre an undertow of melancholy which Crossley brings out beautifully, as he does the shifting moods of In the Mist and still more the set of impressions, memories and introspections that form On an Overgrown Path … It must be clear that no lover of Janáček ’s music should miss this fine album ... It is a most striking achievement.

… there is much to enjoy here for Crossley approaches these familiar items, even Liebestraum with considerable freshness. 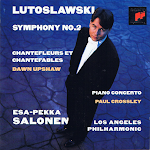 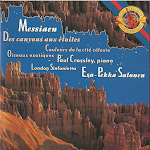 Even had Messiaen’s 80th birthday not been greeted with such a timid silence from the record companies, this album would be something special … Paul Crossley and the London Sinfonietta have been playing this score regularly for a decade: Crossley’s command of its mechanical rhythms and its radiant resonances is absolute, and everybody in the orchestra, too, knows exactly what is going on and why. Esa-Pekka Salonen directs the score with complete confidence.

When Salonen is combined with virtuosos like Paul Crossley and the London Sinfonietta, the result is a performance of etched linearity, sonic brilliance and searing intensity. 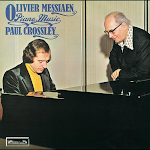 A Messiaen “sampler” ... which deserve to be a best seller. The eight pieces Paul Crossley has chosen show Messiaen for the harmonic magician that he is … and should increase the ever-growing circle of Messiaenists, just as the way they are played is likely to widen appreciation of Crossley’s gifts. 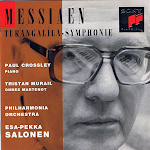 …. spiffingly played, blazing with colour in the big movements and very refined in the slow chamber-sized movements.

… uncompromisingly positive, bold and colourful … and with the advantage of sparklingly precise, almost manically incisive piano playing from Paul Crossley

As piano soloist Paul Crossley couldn’t have been a better choice for this work … it is nearly a miracle that he is able to project such personality – and a bewitching one at that - despite the fact that his role is often subsidiary. 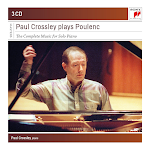 Crossley draws lavishly upon his own naturally elegant style, colouring textures with great subtlety and often evoking a lovely sense of nostalgia. 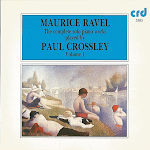 His sonority is characterised by a luminosity particularly suited to the work of Ravel; dynamics are the richest and most subtle; rhythms are irreproachable, combining rigour and suppleness. Finally, and above all, intelligence and sensitivity combine in him to produce that indissoluble alliance which allows him to go to the very extremes of expression without ever passing beyond the limits of taste or transgressing the rules of style. 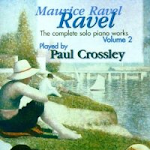 This record is available only in Japan

Schubert - Works for Violin and Piano

All this music makes delightful listening, with Grumiaux producing sounds of endearing sweetness and Paul Crossley supporting him with sensitive understanding. 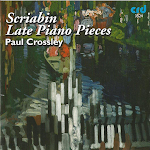 These pieces call for a player of unusual insight, able to catch their evanescent expression on the wing, and with the requisite command to give substance to the insubstantial. In all this Crossley succeeds admirably … authoritative, completely at home in the music’s uncanny imaginative world. 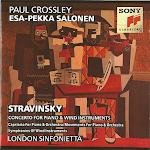 Here is a disc destined to rehabilitate Stravinsky’s works for piano and orchestra … Magnificent interpretation, of corrosive lucidity …. Rarely can enjoyment and discovery have reached such a degree of perfection. 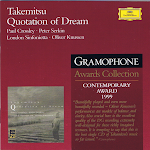 “I dedicate the work to two pianists, Peter Serkin and Paul Crossley, whom I have respected in long friendship”.

riverrun is the perfect introduction to this unique composer ... it’s difficult to imagine a more poetic, sympathetic performance.

Music such as this requires a preternatural sensitivity of touch and an acute awareness of dynamic nuance, while the sustaining pedal is almost as important as the keyboard. In all these qualities Crossley seems ideal.

Crossley, whose outstanding recording of the three Tippett Sonatas was released in 1974, is clearly not only the major British pianist of his generation but also one of the most exciting anywhere in the world today. His account of the Stravinsky, brilliant, incisive and totally committed, is surpassed only by a quite magnificent, concerto-like recording of the Tchaikovsky, a really first class performance in which every stroke tells and each paragraph is knitted together into a symphonic vision which makes a mockery of all the criticism this work has received in the past. Such advocacy is indeed marvellous and to have the technical equipment to match is a bonus difficult to value. Frankly, if Crossley continues in this vein he will leave most of his contemporaries far behind. 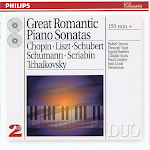 This integral recording of Sir Michael Tippett’s three Piano Sonatas must be hailed as one of the outstanding releases of the year. Quite apart from the richly varied musical content, Paul Crossley’s magnificent pianism and musicianship add a dimension of brilliance and involvement that is totally compelling ... Frankly this record deserves to be a world winner. 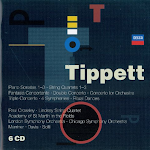 … an enthralling and inspiring experience for which I am profoundly grateful.

Paul Crossley shows himself as an inspired interpreter, more co-creator than executant. Rarely can a pianist have so strongly given the impression of being so perfectly assimilated to the master whose work he serves.

I hope very much that Crossley has a second record on the way with the other two sonatas and more of the delightful smaller pieces … He has many of the attributes of an outstanding Weber pianist – a quick ear for detail, a sense of the melancholy that so often lies within the brilliant gestures, a capacity for sustaining the longer sonata movements by reference to their dramatic content. These are interesting and intelligent performances, by an artist who knows how to use his head and his historical sense as well as his fingers. 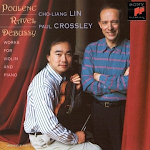 Top billing for Poulenc: if Lin and Crossley are making a point, they do it with panache. They launch his death-haunted Sonata with ferocious energy, tonal richness and an intensity that stays taut when the music turns tuneful.